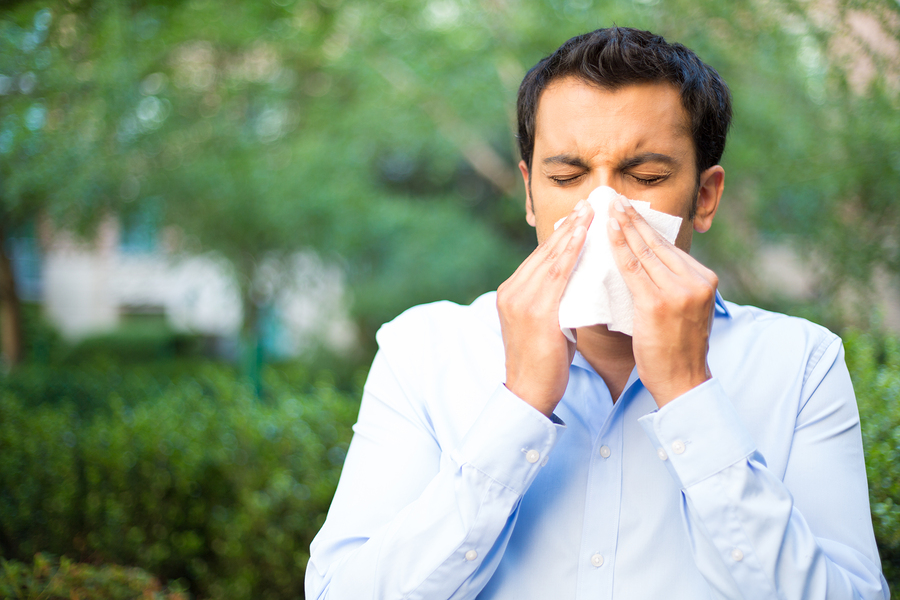 The incidence of allergies in the western world seems to have reached the level of an epidemic. Beyond the fact that the sudden increase could be the result of a greater awareness of the dysfunction, it is now suspected that our modern lifestyle itself might be one of the major culprits.

The level of stress in our lives has a negative effect on our immune system. Research has shown that an increase in the level of emotional stress causes a decrease in the production of white blood cells in the body which are responsible for our immunity, When our defence system is weaker, not only we get sick more often, but it takes us a lot longer to recover. Allergies occur when the body’s immune system wrongly detect a harmless substance as a threat to the body. By attacking the wrong suspect, it triggers the release of a substance called histamine which causes the respiratory inflammation symptoms we are familiar with. Our main immune weapon is located in a small gland in our chest, slightly above our hear. The thymus gland produces white blood cells called T lymphocytes which are responsible for locating and destroying bacteria in the body.

The role of that little gland in our immunity, and survival wasn’t discovered until the early 1960s The Australian Immunologist J. Miller was the first to recognize that new born mammals, including human beings, couldn’t survive without a functioning thymus gland. The body builds its own immune system through contact with the environment. In a form of natural vaccination, gradual exposure to dirt and other sources of bacteria help strengthens the thymus and the whole immune system functions. Our thymus gland starts shrinking after the age of 20. As we get older our immune system becomes progressively weaker, which explains why older people get sick more easily. In addition to stress, our diet can major effect on our immunity.

The Australian herbalist Dorothy Hall, in her bestselling book “What’s Wrong With You ?” recommends using herbs like: Echinacea, thyme, liquorice, rosehip, and oregano which stimulate the production of the thymus gland hormone thymosin. A range of vegetables including, broccoli, cabbage, and cauliflower are also highly beneficial.

Even specific emotions like depression can have an impact on our thymus gland. The practitioners of kinesiology claim to have developed a test which shows that negative emotional feelings weaken that gland. This is not surprising, considering that statistics have shown that depressive patients get sick more often, and have a much shorter life span than the rest of the population.

In Europe, thymus hormones supplements which are routinely prescribed to cancer patients have been linked to dramatic improvements in a wide range of medical conditions including asthma, hay fever, allergies, chronic fatigue syndrome, and rheumatoid arthritis.

Modern Thymus Therapy (MTT) uses extracts from the thymus gland of 6 months old calves which can be taken in capsule form. Although thymus extracts can now be easily bought over the internet, they are not suitable to everyone, and one should consult a medical practitioner first. Also, do you want to take calves extracts for the rest of your life?

In Traditional Chinese medicine, our immunity is associated with a form of protective energy called “Wei Qi “which circulates at a superficial level throughout the channels and organs of the body. One of the ancient Chinese medical principles is, “there is no disease, without an existing weakness in the body”. For example, acupuncture can help control the body’s inflammatory reactions to allergens, but the patients who gets hay fever from pollen allergies have a chronic weakness in their respiratory system which has to be treated as well. Some Chinese medical herbs can be very successful in the treatment of allergies. For example the herb Astragalus or “Huang Qi” has been used for centuries due to its powerful effect on the immune system. Also, herbal concoctions with Chrysanthemum flowers and Cassia seeds can help lower histamine production.

The Western treatment method has often been criticized for treating the symptoms of allergies without addressing the initial cause of the dysfunction which is a weakening of the immune system. Many patients who were using Western medicine to treat their allergies, have found that by introducing alternative forms of medications in increasing dose while at the same time slowly withdrawing from their other conventional treatment, they could gradually substitute one form of treatment to another, and feel all the better for it in the long term.

Olivier Lejus MHSc.BHsc. is a registered acupuncturist practising in Sydney.